Saints Asked Drew Brees To Come Out Of Retirement

With Taysom Hill and Trevor Siemian on the COVID-19 list, the Saints asked Drew Brees if he’d be interested in returning to the field (Twitter link via Nick Underhill of NewOrleans.Football). The legendary quarterback, who seems quite happy in retirement, replied with a picture of himself golfing. 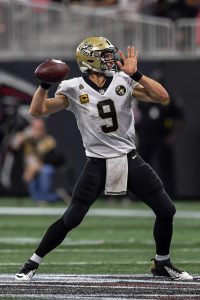 Brees’ response was meant to be tongue-in-cheek, Underhill hears (Twitter link), a polite “no thanks” to his employer of 15 years. For what it’s worth, Jeff Duncan of the Times-Picayune hears that Brees gave it some serious thought. But, even after talking things over with head coach Sean Payton, Brees declined.

“Let me check [my phone],” Brees said jokingly when asked about his availability to play later that week. “I’ll be there Saturday to call the Notre Dame-Navy game, and I’ll be [in the broadcast booth on] Sunday.”

Brees, 43 in January, will be somewhere else when the Saints host the Dolphins on Monday night. Unless Hill or Siemian are cleared, the Saints will start fourth-round rookie Ian Book with newcomer Blake Bortles as the QB2.