Two teams have Matt Eberflus in their respective coaching searches, at present, though that list could expand. The Jaguars are strongly considering the Colts’ defensive coordinator, however. 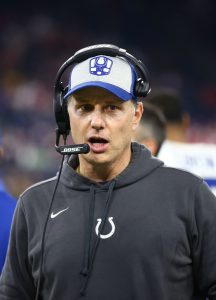 Eberflus will receive a second interview with the Jaguars on Thursday, Tom Pelissero of NFL.com tweets. The four-year Indianapolis DC is the first candidate Jacksonville will interview a second time.

The Jags are plenty familiar with Eberflus, having played his defenses eight times since he took over the Colts’ unit. Brought to Indy during Josh McDaniels‘ brief time assembling a staff for a Colts job the Patriots staffer ended up declining at the 11th hour, Eberflus has overseen top-10 scoring defenses in three of his four years. Eberflus, 51, skipped the in-season virtual interview with the Jags but has moved forward in this process since the season ended.

The former Cowboys assistant has seen his name surface in a few HC searches in recent years. The Bears interviewed him for their vacancy Monday, and the Texans, Jets and Chargers met with him last year. As for where the Jags stand, here is how their interview process is shaping up as of Tuesday night: