Assuming Evan Engram is able to generate some interest in free agency this offseason, the tight end’s stint in New York has likely come to an end. As Ralph Vacchiano of SNY.tv writes, the Giants won’t break the bank to retain the former Pro Bowler. 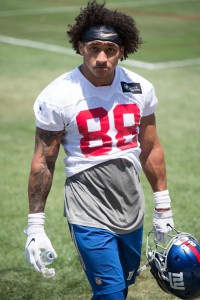 Since being selected in the first round of the 2017 draft, Engram has had an up-and-down five seasons with the Giants. After being limited to only 19 games between 2018 and 2019, he managed to stay healthy in 2020, appearing in 16 games (14 starts) while hauling in 63 receptions for 654 receiving yards en route to a Pro Bowl nod.

The 27-year-old has managed to stay relatively healthy again in 2021, but his numbers have suffered thanks (in part) to inconsistent quarterback play. In 14 games, Engram has 45 catches for a career-low 404 receiving yards and three touchdowns.

The Giants were willing to pick up Engram’s fifth-year option for 2021, but they haven’t made any moves on an extension. It seemed pretty clear that the tight end was probably on his way out of the New York when his name surfaced in trade rumors earlier this season. Engram will be part of a free agent tight ends class that also features Dalton Schultz, Mike Gesicki, and vets like Rob Gronkowski and Zach Ertz. Even if Engram isn’t atop the FA list, Vacchiano still opines that the player could command a contract worth $8MM per season. If that’s the case, the Giants won’t match.