The Buccaneers will be finishing the regular season with a number of key pieces missing. According to an injury update from ESPN’s Jenna Laine, Tampa Bay will be without their top two pass rushers, top two running backs and, in all likelihood, an experienced piece of the secondary. 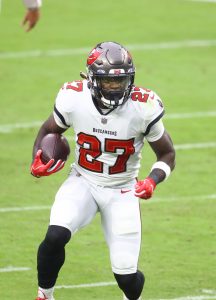 Outside linebacker Shaquil Barrett tested positive for COVID-19, which added another reason for him to miss Sunday’s game against Carolina. He is still recovering from a sprained MCL and ACL suffered during the team’s Week 16 win over the Panthers. In 15 games, Barrett has 51 tackles and a team-leading 10 sacks. His pass-rushing partner, Jason Pierre-Paul, will also be out due to a torn rotator cuff that’s kept him out since Week 15. Pierre-Paul has registered 31 tackles, 2.5 sacks and one forced fumble in 12 games in 2021. In their absences, look for Anthony Nelson and Joe Tryon-Shoyinka to start.

Meanwhile, backup running back Ronald Jones will be out after suffering an ankle injury in Week 17’s comeback win over the Jets. Head Coach Bruce Arians said, “we’ll have to wait and see on [Jones’] ankle because he can run straight but he still can’t cut”. The 24-year old had a walking boot on earlier in the week, but not any longer. Jones has 428 rushing yards and four touchdowns this season. Starter Leonard Fournette, in the meantime, remains on IR, but Arians is optimistic he will be ready for the playoffs. The Bucs would sorely miss his 1,266 scrimmage yards and 10 total touchdowns if doesn’t get activated in time. Ke’Shawn Vaughn is expected to play, and likely start, in Week 18.

Finally, cornerback Richard Sherman is listed as doubtful with an Achilles injury. After suffering a grade 2 calf sprain in November, the 33-year old came back in Week 14. However, he has missed two of three games since, and continued a downward trend in terms of playing time. After being on the field for nearly every down in his first two games as a Buc, Sherman has played a total of 29 snaps since, registering 11 tackles and one interception. Despite the news, Tampa Bay’s secondary is healthy overall.

The Buccaneers head into the final week of the season as the NFC’s third seed, where they will likely end up. They could move up to second, however, with a win over the 5-11 Panthers, along with a 49ers win over the Rams. Regardless of where they finish, though, health will be a huge question mark as they try to repeat as Super Bowl champions.