The Packers’ collective return to full strength, or close to it, continues. They activated outside linebackers Za’Darius Smith and Whitney Mercilus from IR on Friday, putting each in position to return Saturday night. 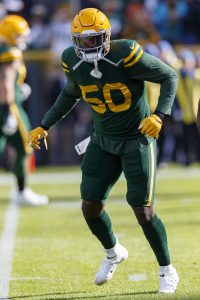 This will be an interesting co-return effort, given that the Pack added Mercilus to fill the void Smith’s back surgery created. With each now on the 53-man roster, both are expected to be in uniform against the 49ers in the divisional round.

While the Packers have seen David Bakhtiari, Jaire Alexander and Randall Cobb steadily return from IR, Smith marked the last of the team’s injured stalwarts to resurface. But shortly after the regular season ended, the Pro Bowl edge rusher re-emerged on the radar for a postseason return. Smith has only played 18 snaps this season, aggravating his back injury in Week 1 and undergoing surgery.

A big-ticket offseason addition in 2019, Smith served as Green Bay’s top pass rusher from 2019-20. He combined for 26 sacks and two Pro Bowls in those seasons, proving his 2018 contract year in Baltimore was no fluke. It is uncertain if the 29-year-old defender will be with the Packers beyond these playoffs, given a monster 2022 cap number and some issues with a redone contract, but he will rejoin Preston Smith and Rashan Gary to give Green Bay a high-profile two-deep depth chart at this position.

Za’Darius Smith and Mercilus have yet to suit up for a game together. The Packers signed the latter in October, doing so shortly after the Texans cut him. Mercilus has not played since Week 10 and was believed to be out for the season with a biceps tear. However, the longtime Texans edge returned to Packers practice last week. Mercilus registered four sacks this season, three of those coming with Houston, but profiles as an interesting off-the-bench option for the NFC’s top seed. The 10th-year defender has fared well in the playoffs, accumulating seven postseason sacks during his career.