The Rams will be without Andrew Whitworth against the Buccaneers on Sunday. The longtime left tackle will miss his team’s divisional-round game due to the knee injury he suffered Monday. 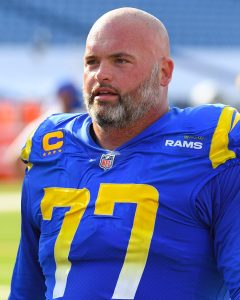 Whitworth went down on the Rams’ first play against the Cardinals but ended up returning. However, Sean McVay said the swelling in the injured right knee will force an absence Sunday.

Whitworth did play 30 of the Rams’ 60 offensive snaps against the Cards, but Joe Noteboom spelled him on the left side otherwise. A former starter, Noteboom replaced Whitworth in the Rams’ lineup in the two games the 40-year-old blocker missed this season. Noteboom also worked as Whitworth’s replacement during the 2020 season. Whitworth suffered a torn MCL in his left knee last season.

No IR designation has been made for Whitworth, keeping him eligible to play next week — should the Rams notch a second win over the Bucs this season. This will be the third time in the Bucs’ past four playoff games they have faced a team missing its left tackle, with Tampa Bay having gone against the Packers without David Bakhtiari in last year’s NFC championship game and the Chiefs without Eric Fisher in Super Bowl LV. Shaquil Barrett made a major impact in both championship-cementing contests, combining for four sacks and eight quarterback hits.

Safety Taylor Rapp, who remains in concussion protocol after missing the Rams’ wild-card game, will also miss Sunday’s Bucs rematch. Nick Scott and Terrell Burgess are in line to start a second playoff game for the Los Angeles, which used the recently unretired Eric Weddle in 19 snaps against Arizona.

One comment on “Rams LT Andrew Whitworth Out Vs. Bucs”