On thin ice for much of this season, Mike Zimmer is not expected to receive a ninth year as Vikings head coach. Minnesota is expected to move on from its longtime HC after Week 18, Jason La Canfora of CBS Sports reports. 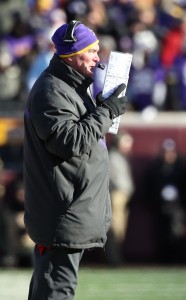 This situation was headed toward this conclusion for a bit now, with the Vikings’ past two losses likely sealing the defensive-minded coach’s fate. Ownership nearly canned Zimmer after the Vikes’ run to the divisional round in 2019, so it was going to be tough for the 65-year-old HC to withstand back-to-back losing seasons.

While the Vikings have made the playoffs three times under Zimmer, his abrasive style has worn on the team, La Canfora adds. The team’s two Kirk Cousins contracts have not produced the desired results, with the high-priced quarterback set to finish 1-for-4 in playoff berths under Zimmer. The Vikings advanced to the postseason in 2015 with Teddy Bridgewater at the controls and reached the 2017 NFC championship game with Case Keenum. Zimmer’s defenses were in better shape during those seasons; injuries limited the Vikings’ defensive capabilities over the past two years.

A longtime defensive coordinator, Zimmer had the Vikings perched as a top-10 scoring defense from 2015-19. Over the past two seasons, however, the team has fallen off that pace. Going into Week 18, Minnesota ranks 25th in points allowed and 31st in total defense. The 7-9 squad has been without Danielle Hunter for most of this season and lost Everson Griffen in November. Hunter missed all of last season as well. Zimmer would likely be a strong DC candidate elsewhere if/once the Vikings pull the trigger on firing him.

GM Rick Spielman‘s status is less certain, but he should be expected to return. Spielman has been with the Vikings since 2006, lasting through the Brad Childress, Leslie Frazier and Zimmer tenures. Although the Vikings could start fresh with a new GM, Albert Breer of SI.com notes Spielman is expected to remain with the team — be it in his current role or in another executive position. La Canfora also hears Spielman is not viewed as a chopping-block candidate. Spielman, 59, could be in position to select the next Vikings GM, in a scenario similar to how the Broncos transitioned from John Elway in that post last year.