Not long after the Bears met with Joe Brady about a staff position, the Bills will be the team that lands the former Panthers offensive coordinator. Brady will sign on as Buffalo’s quarterbacks coach, Ian Rapoport of NFL.com tweets. 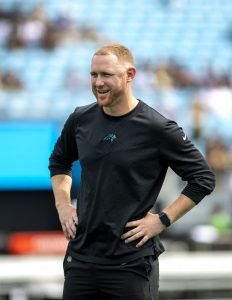 While the Sean McDermott–Brandon Beane Bills have brought in many ex-Panthers players in recent years, this Brady hire does not stem from past connections. Brady joined the Panthers as their OC well after McDermott and Beane were in Buffalo, but the former architect of LSU’s record-setting offense represents an interesting hire for a team that just lost play-caller Brian Daboll to the Giants.

Brady, 32, will team with new Buffalo OC Ken Dorsey as McDermott’s top offensive staffers. Dorsey will be in line to call plays for the Bills, a role Brady had with the Panthers for most of the past two seasons. Bringing nearly three full seasons’ worth of coordinator experience, Brady stands to help the cause as Josh Allen‘s new position coach. This will be Dorsey’s first season as a coordinator at any level.

After Brady helped Joe Burrow set a record with 60 touchdown passes for a national championship-winning Tigers team in 2019, his Panthers quarterback situations were not on that level. Brady booked five head coaching interviews in 2021, but the Panthers dropped from 21st to 30th in total offense from Brady’s first Carolina season to his second. Carolina’s Sam Darnold–Cam Newton QB situation doubled as one of the league’s worst; Allen will be a considerable step up for a coach attempting to rebound after a December firing.

3 comments on “Bills To Hire Joe Brady As QBs Coach”