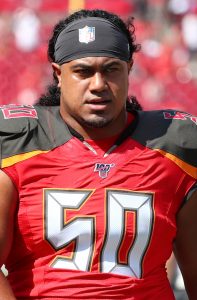 Specifically, the team restructured the veteran’s base salary, opening up $7.64MM worth of cap space. Greg Auman of The Athletic has more details (via Twitter), noting that the organization reduced Vea’s salary from $10.6MM to $1.12MM, leading to the player getting a $9.46MM bonus.

The Buccaneers barely had any breathing room over the cap heading into the offseason, and that was before they slapped wideout Chris Godwin with the franchise tag. The team will surely have more cap-saving transactions, but they’ll still be hard pressed to afford all of their impending free agents, a group that includes Carlton Davis.

Vea has spent his entire four-year career in Tampa Bay, and the former first-round pick signed a four-year, $73MM extension with the Buccaneers back in January. He made his first Pro Bowl in 2021 after finishing with 33 tackles, four sacks, and 12 QB hits.