Despite rostering Mike Evans and Chris Godwin, the Buccaneers have agreed to terms with Russell Gage. The ex-Falcons wideout will join the Bucs’ deep receiving stable, Ian Rapoport of NFL.com tweets. 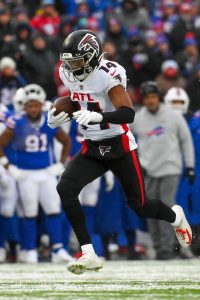 It’s a three-year deal worth $30MM, according to Aaron Wilson of ProFootballNetwork.com (on Twitter). The deal contains $20MM in guaranteed money.

Coming off back-to-back 700-yard seasons, Gage looks set to step into Tampa Bay’s WR3 role — one vacated by Antonio Brown — behind the two Pro Bowlers. This move arms the Bucs with a proven complementary weapon while further depleting a Falcons receiving corps that has seen its crew decimated over the past several months.

Since June 2021, the Falcons have seen their Gage-Julio Jones–Calvin Ridley trio gutted by the Jones trade, Ridley’s in-season exit and subsequent gambling suspension and now this impending transaction. Atlanta has some critical work to do at the receiver position this offseason. Gage’s 770 receiving yards — in just 14 games — were by far the most among Falcons wideouts last season.

The Bucs used their franchise tag on Godwin for the second straight year, keeping their younger Pro Bowl receiver in the fold for Tom Brady‘s third season with the team. While Brady famously advocated for Brown, constant turmoil notwithstanding, the mercurial standout burned the Bucs for that faith late last season. Gage is now set to step into a much higher-profile NFC South role.