Tyreek Hill‘s second round of off-field trouble led to the Chiefs signing him to a uniquely structured contract, one that protected the team in the event the star wideout encountered another issue. With the perennial Pro Bowler having avoided controversy in the years since, the sides are now discussing a new contract, per NFL.com’s Ian Rapoport (video link). 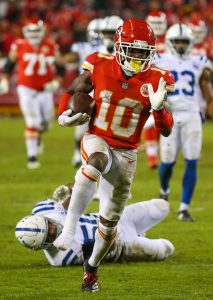 The Chiefs went from being unsure the deep threat would be in their 2019 plans to reaching a three-year, $54MM agreement before that season. One season remains on that deal. Hill and the Chiefs’ negotiations on a third contract have transpired throughout this week, pointing to a new pact being in sight, and Rapoport adds this extension would be a more traditional contract. A new deal would reduce Hill’s 2022 cap number (currently $20.7MM) and arm the Chiefs with additional cap room.

Having fallen to the 2016 fifth round due to an ugly rap sheet, Hill became an integral part of the Chiefs’ first Patrick Mahomes-centered offense with an All-Pro season in 2018. Allegations of child abuse put Hill’s career in jeopardy in 2019. The NFL did not receive sufficient cooperation from a local district attorney’s office during its investigation and opted not to suspend Hill, and the all-time speed merchant continued his run as one of the league’s top receivers. It should now be expected Hill will become a $20MM-per-year player.

Hill, who turned 28 this week, has teamed with Travis Kelce to form a top-end receiving duo for Mahomes. The Chiefs have been unable to rely on their supporting cast during this period, but Mahomes’ top two targets have mostly made up for it. Teams moved to minimize Hill deep targets this past season, dropping his yards-per-catch figure to 11.2, but he still caught a career-high 111 passes and accumulated 1,239 yards.

Kansas City extended Kelce in 2020. Hill’s deal will likely settle in at the No. 3 spot among receivers, per Aaron Wilson of ProFootballNetwork.com. DeAndre Hopkins‘ $27.25MM-AAV contract still an outlier, and Julio Jones‘ $22MM-per-year pact remains second among wideouts. Hill is looking at an extension worth around $21.25MM annually, Wilson notes, adding that more than $50MM in guarantees stand to come the Chiefs wideout’s way.