Landon Collins was the first safety to secure a contract worth at least $14MM per year. Three years after authorizing that deal, Washington plans to give the hybrid defender an ultimatum. 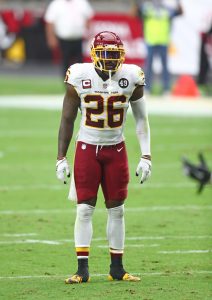 The Commanders are asking Collins to take a pay cut, John Keim of ESPN.com tweets. If the veteran refuses, the team will cut him. A Collins release would save the Commanders $6.6MM while saddling the team with nearly $10MM in dead money.

This is not the same front office that gave Collins a six-year, $84MM deal in 2019, and although Keim adds the Ron Rivera regime would like Collins to stay, they do not plan to retain him on a team-high $16.1MM cap number (Twitter link). Collins, 28, bounced back from an October 2020 injury to play in 13 games last season. Washington deployed the former second-round pick as a linebacker-safety hybrid, and the team would use him in that capacity again in 2022 — if he agrees to the pay reduction.

“Yeah, for what he does and playing that position, he can be a dynamic guy for us,” Rivera said of Collins’ hybrid role, via the Washington Post’s Nicki Jhabvala. “He’s a guy that made an impact when he played that position.”

Known more for his box work than coverage skills, Collins would not come especially close to matching his current average salary on the market. The ex-Giants Pro Bowler would certainly draw interest and would help the Commanders this season if retained. Although he did not factor in prominently to Washington’s top-five defense in 2020, Collins finished with 81 tackles, two interceptions, two fumble recoveries and three sacks last season.

Washington has Kamren Curl tethered to his rookie deal, but 2021 pickup Bobby McCain is a free agent and Deshazor Everett is embroiled in serious legal trouble. The team wants to retain McCain, Jhabvala adds. McCain, 28, has also played multiple positions as a pro, moving between safety and cornerback. He started 16 games last season. Washington signed McCain, whom the Dolphins cut, to a one-year accord worth close to the league minimum last year.