The Falcons have made a cost-cutting move along the defensive front. The team announced that they have released defensive tackle Tyeler Davison. 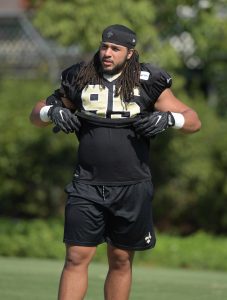 The move incurs a dead cap charge of roughly $1.2MM, but creates just under $3.7MM in savings. The 29-year-old was a fifth round pick of the Saints in 2015. He spent his first four seasons in New Orleans, then went to the rival Falcons on a one-year deal in 2019.

That contract was followed up by a three-year, $12MM deal with Atlanta one season later. He accepted a pay cut in year two of the pact, a sign that the team may have been willing to cut ties, as they have now done. In 2021, he registered 30 tackles in 12 games.

Most notably for Davison, his playing time decreased significantly as the year wore on. He was on the field for a career-low 358 snaps, which represented just 43% of the team’s defensive plays. Playing time was opened up for Anthony Rush at the position.

The move is the second such one for the Falcons’ front seven, as last month, the team parted ways with edge rusher Dante Fowler. Neither move should be considered surprising, given the fact that Atlanta ranked 27 in the league against the run (132 yards per game) and last in sacks (17).