Panthers Down To QB-Or-Left Tackle Decision In Round 1?

Missing out on Deshaun Watson, the Panthers feature a glaring quarterback need. They have been connected to using the No. 6 overall pick on a passer, but it may well come down to a grade-vs.-need situation.

ESPN’s Scouts Inc. has no quarterback graded inside the top 20 this year, slotting Malik Willis 21st and Kenny Pickett 22nd. The Panthers have been connected to both players, and teams regularly reach for QBs due to positional value. Scott Fitterer confirmed the Panthers will likely have higher-rated players on their board by No. 6, among them could well be a candidate to fill the team’s perennial left tackle need. 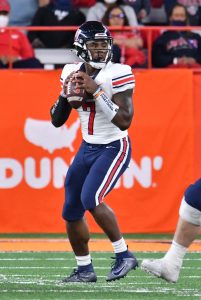 “This will be interesting because the tackles will be the best players on the board. But we do need a quarterback, and at some point you have to take a shot, especially in the top 10,” Fitterer said, via Panthers.com’s Darin Gantt. “You hate to force it, because when you force it, you could make a mistake.

“It’s a unique quarterback class, because there’s not a clear number one, number two, number three. Like, who’s the proven starter who can come in and play for you? That’ll be the conversation we have for the next month — quarterback or left tackle.”

Carolina features dire needs at both spots, and this draft’s third-highest-graded tackle (Mississippi State’s Charles Cross) checks in at No. 15 overall, per Scouts Inc. If tackles Evan Neal and Ikem Ekwonu are off the board by the Panthers’ No. 6 pick, as both top-five candidates could be, that would seemingly make for an easier decision. Fitterer and Matt Rhule attended both Willis and Pickett’s pro days last week. Pickett originally committed to join Rhule at Temple but backed out after the current Panthers HC took the Baylor job.

The Panthers also traded their second- and third-round picks; following Carolina’s No. 6 overall choice, the team does not pick again until No. 137. Fitterer, who worked under trade-down aficionado John Schneider in Seattle, said the Panthers “would love” to trade back. But the team’s needs may take precedence. The Panthers added two starting O-linemen in free agency — inside blockers Austin Corbett and Bradley Bozeman — but have not enjoyed left tackle continuity in many years. Going into his fifth-year option season, Sam Darnold remains Carolina’s top QB.

“I think with the economics of the [quarterback] position, though, going with the rookie is the good way to go,” Fitterer said, via Joe Person of The Athletic (subscription required). “Drafting and developing. And if you miss on this one, take another one next year. Take another one the year after till you get one. Just keep swinging till you get one.”

Only one team in the past 40 years has taken QBs in back-to-back first rounds; the Cardinals chose Josh Rosen and Kyler Murray in 2018 and ’19. They traded Rosen a day after drafting Murray. Rhule, who will enter the season on the hot seat, likely will not have the luxury of missing on a first-round quarterback. Veterans remain available, but the Panthers are not believed to be interested in Baker Mayfield and have not been closely connected to Jimmy Garoppolo.

8 comments on “Panthers Down To QB-Or-Left Tackle Decision In Round 1?”