The Patriots have made a notable cost-cutting move. Per ESPN’s Field Yates, the team is releasing veteran linebacker Kyle Van Noy (Twitter link). 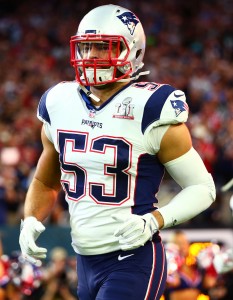 Van Noy, who will be 31 by the start of the 2022 season, signed in New England last year following a single campaign in Miami. As a result of the way the deal was structured, he accounted for a reasonable $4.37MM against the cap in 2021. However, that figure was set to jump to $7.4MM for next year. New England will save nearly $5MM by letting him go.

Originally a draft pick of the Lions, Van Noy is most well-known for his solid play with the Patriots. 2021 was no exception, as he posted 66 tackles, five sacks and a pick-six. In coverage, he earned a PFF grade of 84.3, proving his value in all aspects of the game. Like in every full season in New England, he played over 80% of the team’s defensive snaps.

On the other hand, Van Noy was a member of the linebacking corps which struggled to handle faster offensive opponents. With Jamie Collins, Dont’a Hightower and Ja’Whaun Bentley all pending free agents, this move creates the possibility that nearly the entire position group could be different come next season. Outside of Matt Judon, the team has little in the way of known commodities at the second level of their defense.

The release means Van Noy is free to sign at any time, rather than having to wait until the official beginning of free agency. For the second straight year, he finds himself in the position of needing to find a new home after a productive season; the Patriots, meanwhile, now have just under $13.5MM in cap space to work with.