The Ravens will continue their John Harbaugh partnership for a while. The rumored extension for the longtime Baltimore HC came to fruition Tuesday. Steve Bisciotti announced Harbaugh has signed a three-year re-up, per The Athletic’s Jeff Zrebiec (on Twitter). 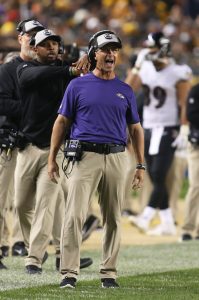 This is Harbaugh’s fifth extension since he joined the Ravens in 2008. Harbaugh, 59, was entering a contract year; he is now signed through the 2025 season. With Sean Payton moving on from his Saints post, Harbaugh will enter the season as the NFL’s third-longest-tenured HC.

While the Ravens stumbled down the stretch last season, tumbling out of the playoff picture thanks to a six-game losing streak, Harbaugh has been one of the NFL’s steadier leaders since taking over. Baltimore has ventured to nine playoff brackets under Harbaugh, who has taken the team to three AFC championship games and secured the franchise’s second Super Bowl title nine years ago. He will enter the 2022 season with 137 wins (27th all time) and a .609 win percentage (33rd all time).

Baltimore’s only two losing seasons under Harbaugh came when his starting quarterback missed significant time. Prior to Lamar Jackson missing games to close out this past season, Joe Flacco suffered a torn ACL during the 2015 campaign. During the Flacco-to-Jackson transition year, uncertainty emerged regarding Harbaugh’s Baltimore future. Jackson’s late surge in that 2018 season helped Harbaugh off the hot seat, and he has not been connected to potentially losing his job since.

With Harbaugh locked down, focus can now shift to Jackson’s contract. Harbaugh has repeatedly said the former MVP will land a long-term extension from the Ravens, but no reports have indicated the sides are particularly close on a deal.