It didn’t take long for Myles Jack to find his next gig. The former Jaguars linebacker is signing with the Steelers, reports ESPN’s Adam Schefter (via Twitter). It’s a two-year deal worth $16MM. 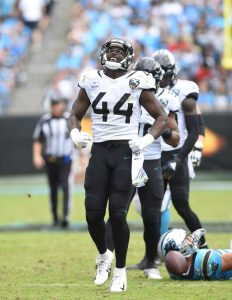 Jacksonville’s spending spree was going to come with a cost, and the team ultimately decided to move on from their leading tackler yesterday. Jack inked a four-year, $57MM deal ($33MM guaranteed) with Jacksonville back in 2019.

With that said, Jack is still a productive player. He finished last season with 108 tackles in 15 starts, and he had a career-high 118 tackles as recently as 2020. The former second-round pick won’t turn 27 until September, so it makes sense that the Steelers still think he’s got something in the tank.

Many of the Steelers initial FA moves were focused on offense, but the team has started adding to their defense. We learned yesterday that the team was signing cornerback Levi Wallace to a two-year deal.