Although the Vikings have changed GMs and coaching staffs, Patrick Peterson will return for a second season in Minnesota. 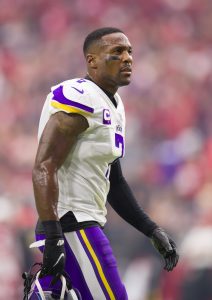 The All-Decade cornerback said during an appearance on the All Things Covered podcast (Twitter link via NFL.com’s Tom Pelissero) he is re-signing with the Vikings on a one-year deal. The deal is worth $4MM, including $3.5MM in guaranteed money, per NFL Network’s Mike Garafolo on Twitter). This will be Peterson’s 12th NFL season.

After regressing toward the end of his Cardinals tenure, which featured a 2019 PED suspension, the former top-five pick performed better in his first Vikes campaign. Peterson allowed a 67% completion rate as the nearest defender in coverage in 2020; he dropped that number to 56% last season. Peterson’s passer rating-against figure also dropped considerably (98.2 to 78.7) in that span. While the 6-foot-1 cover man is not the player he was at his peak, he remains a capable starter.

The Vikings waived Bashaud Breeland late last season; he ended the season with the Cards. Former Minnesota first-round corner Jeff Gladney is also with Arizona, having signed with the NFC West squad this offseason. Minnesota returns Cameron Dantzler, who started seven games last year, and signed slot defender Chandon Sullivan from Green Bay. The Vikings also added potential depth pieces in Nate Hairston and Tye Smith this week. Even with Peterson’s return, the Vikings still have a need at the position. Peterson expects the team to further address cornerback in the draft (Twitter link via Tomasson).