Deebo Samuel wants out. On Wednesday, the wide receiver said that he has asked the 49ers for a trade (Twitter link via Jeff Darlington of ESPN.com). 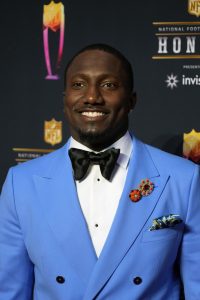 Samuel declined to go into specifics, but this may have something to do with his contract. Samuel has reportedly asked the Niners for something in the range of $25MM/year, which would make him one of the highest-paid WRs in the league.

Samuel made his request known last week, according to NFL.com’s Ian Rapoport (Twitter link). “Money is not at the root,” of his issues with the team, per RapSheet (on Twitter) — Samuel is also upset about how he has been used in the Niners’ offense.

The speculation around Samuel has been building for weeks, especially after he removed all mentions of the 49ers across social media. Meanwhile, the Niners’ multiple offers to Samuel have not yielded much progress. Samuel’s reported ask for ~$25MM/year deal would vault him ahead of other recent WR deals including those for D.J. Moore, Chris Godwin, and Mike Williams.

The South Carolina product has held up his end of the bargain so far, notching 167 catches for 2,598 yards and ten touchdowns across the last three seasons. He’s also done damage out of the backfield, notching 550 rushing yards and eleven TDs on the ground.

You’d be hard-pressed to find a team that wouldn’t want to add Samuel, particularly after his Pro Bowl / All-Pro campaign. In just 13 games last year, Samuel racked up 869 receiving yards and averaged nearly 14 yards per catch. He also took 59 carries for 365 yards and eight touchdowns, positioning him as one of the most dynamic offensive talents in the game today.