Despite Vinny Curry suffering a late-summer health issue that prevented him from playing for the Jets last season, the parties are reuniting. The Jets re-signed the veteran defensive end Wednesday, Doug Kyed of Pro Football Focus tweets. 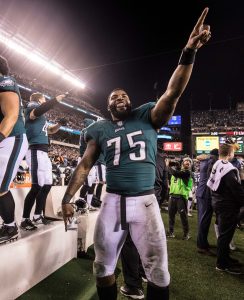 The former Eagles and Buccaneers defender dealt with a number of complications stemming from blood clots and a recent spleen removal, leading to the Jets placing him on their non-football injury list in August. The team released Curry from its NFI list shortly before the season ended, but the sides will try to make it work again in 2022.

Curry (34 in June) played eight seasons with the Eagles from 2012-20 — sandwiched by a 2018 Bucs partnership — and served as either a starter or key rotational cog. He totaled eight sacks and 22 quarterback hits over his final two Eagles seasons but signed with the Jets on a one-year, $1.3MM deal in 2021. It will be interesting to see if Curry can complete his comeback from the issues he battled last year.

The Jets played without their big-ticket pass rusher addition last year and saw no edge rusher accumulate more than two sacks. Carl Lawson is expected to lead Gang Green’s edge crew this season, with Curry in a potential supporting role. But it is likely the team will add a major piece to its defensive line in the draft. Kayvon Thibodeaux is on the Jets’ radar.