The list of rookies to sign their first NFL contracts continues to grow, and now includes the draft’s second overall pick. The Lions have signed Aidan Hutchinson to his rookie deal, as confirmed by his agent, Mike McCartney. 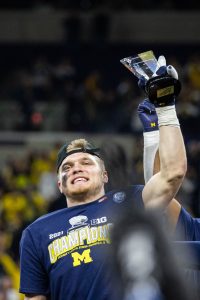 NFL Network’s Ian Rapoport details (on Twitter) that the contract has a fully-guaranteed value of just over $35.7MM across four (or, with a team option, five, years), and includes a signing bonus of nearly $23.2MM. Hutchinson becomes the second top-five pick to ink his inaugural deal, joining Ahmad Gardner of the Jets.

The Michigan native followed in his father’s footsteps playing for the Wolverines in college. His career started to take off during his sophomore season, as he totalled 69 tackles, including 11 for a loss and 3.5 sacks. That led to heightened expectations for the following campaign, but it was cut short by a fractured leg.

While Hutchinson was again the subject of optimism for an overall strong Michigan defense going into this past season, he wasn’t in the conversation to be in consideration for the top pick. That changed week by week, as he authored one of the most productive campaigns in school history, setting a program record with 14 sacks, adding 16.5 tackles for loss and a pair of forced fumbles. That made him a finalist for the Heisman trophy, as well as a candidate for Jacksonville with the No. 1 pick.

Ultimately, the Jaguars made Travon Walker the top selection, leaving the dream scenario in play for Detroit. The Lions didn’t hesitate to pick Hutchinson, making him an immediate anchor of the team’s defense. He – alongside third-rounder Josh Paschal – will look to boost the Lions’ pass rush and continue the overall progress made at the end of the 2021 campaign.

Not long before the Hutchinson signing was announced, the Lions inked their final 2022 draftee. Seventh-rounder Chase Lucas agreed to terms on his rookie deal, per Rapoport’s colleague Mike Garafolo (Twitter link).