Earlier this week, the first 2022 draftee signed his rookie contract. Today, the first prospect selected on Day 1 has inked his NFL deal. The Packers have agreed to terms with defensive tackle Devonte Wyatt, per NFL Network’s Ian Rapoport (Twitter link). 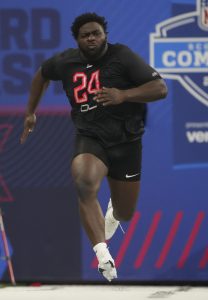 Wyatt was the second of two Packers first-round choices, going 28th overall. He is set to join former Georgia teammate Quay Walker, who went at No. 22. Wyatt was the second interior defensive linemen selected, behind another former Bulldog, Jordan Davis (taken 13th by the Eagles).

The six-foot-three, 315 pounder was a mainstay of Georgia’s defensive front, and played a key role in the team’s national championship. The 2021 campaign was his most productive, as he totalled 39 tackles (including seven for a loss) and 2.5 sacks. Seen as the more trusted prospect in terms of pass rushing compared to Davis (albeit the one with less overall upside), Wyatt was projected by many to be taken in the latter stages of the first round.

As Rapoport notes, the deal is for four years (with a fifth-year team option) carrying a fully guaranteed value of $12.86MM. The contract also includes a $6.533MM signing bonus. In Green Bay, Wyatt will join a defensive line led by Kenny Clark, but which faces uncertainty beyond the 2022 season. Both Dean Lowry and free agent signee Jarran Reed have only void years left on their respective contracts after the coming season, so Wyatt will provide a long-term answer on the defensive front as the Packers try to keep their Super Bowl window open as long as possible.