The Panthers have found their new return specialist. Former Pro Bowler Andre Roberts is signing with the Panthers, reports Adam Caplan (on Twitter). 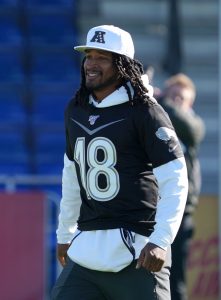 Despite the 2021 campaign being Roberts’ 12th NFL season, the veteran still put forth one of his best professional seasons. Roberts split the season between the Texans and Chargers, finishing with a league-leading 1,010 kick return yards. Roberts also added 20 punt returns en route to a second-team All-Pro nod. Per Caplan, the Chargers were interested in bringing Roberts back, but the organization wasn’t willing to offer much in guaranteed money. Roberts also generated interest from the Eagles before signing with Carolina.

Roberts has earned three Pro Bowl appearances and three All-Pro nods throughout his career, thanks in part to six special teams touchdowns. He’s also been relatively productive on offense, including a 2012 season where he had 759 receiving yards and five touchdowns. However, in the past five seasons, Roberts had only collected 223 total yards from scrimmage.

The Panthers relied on Alex Erickson as their primary punt returner last season, while veteran RB Ameer Abdullah got the bulk of the kick returns. Erickson is still on the roster, but Abdullah has since joined the Raiders.