The Seahawks continue to be mentioned as a suitor for one of the several available veteran QBs. However, coach Pete Carroll doesn’t envision the organization adding to the position, per ESPN’s Brady Henderson (on Twitter). 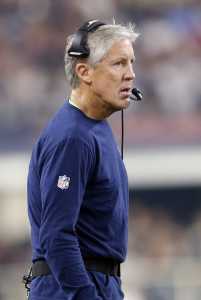 “I don’t see us making a trade for anybody at all,” Carroll told reporters. “I don’t see that happening.”

After trading Russell Wilson earlier this offseason, the Seahawks have been connected to a number of available quarterbacks, including Baker Mayfield (who mentioned the Seahawks himself) and Jimmy Garoppolo. The Seahawks make sense as a landing spot; after all, the team’s options at quarterback are currently Geno Smith and Drew Lock. The team is also rostering former Colts fourth-round pick Jacob Eason and recent UDFA addition Levi Lewis.

Lock, who was acquired in the Wilson trade, struggled during his three seasons in Denver. Despite his second-round pedigree, the QB went 8-13 as a starter while tossing 25 touchdowns vs. 20 interceptions. Smith stepped in for the injured Wilson midway through the 2021 campaign. In four total appearances (including three starts), he threw for 702 yards and five touchdowns, completing over 68% of his passes.

The organization was expected to address the position at some point this offseason. They didn’t end up adding a QB in the draft, so no matter what Carroll says publicly, the team will likely be connected to any available quarterbacks until the trade deadline (or until they end up making a move).