The closeout pick on the Georgia defense’s banner night, Lewis Cine signed his rookie contract Wednesday. The Vikings have their first-round safety signed to his four-year pact. 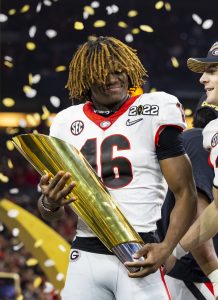 Cine’s rookie contract, which can run through 2026 via the fifth-year option, is fully guaranteed, Adam Schefter of ESPN.com tweets. It is worth $11.5MM.

Georgia’s dominant defense produced five first-round picks — Travon Walker, Jordan Davis, Quay Walker, Devonte Wyatt and Cine — and had representation on all three levels. Cine was the only Bulldogs secondary cog selected in Round 1, and it came after the Vikings traded back 20 spots to allow the Lions to move up for Jameson Williams. Minnesota acquired the Nos. 32 and 34 overall picks from its division rival, before trading down from No. 34 to enable the Packers to grab wideout Christian Watson to start the draft’s Friday session. The Vikings picked up two Packers second-rounders to do that, and new GM Kwesi Adofo-Mensah used that ammo to move up in Round 2 for Clemson cornerback Andrew Booth.

ESPN.com’s No. 41 overall prospect, Cine established new career-high marks in tackles (73) and passes defensed (nine) as a junior to both help the Bulldogs to a 14-1 national championship-winning season and move himself toward the first-round radar. Cine earned second-team All-SEC acclaim last season and became the Vikings’ first Round 1 safety pick since Harrison Smith 10 years ago. Cine figures to team with Smith in Minnesota’s starting lineup soon.