The Bears have inked their top draft pick to a contract. The team announced that they have signed second-round Kyler Gordon to his four-year rookie contract. 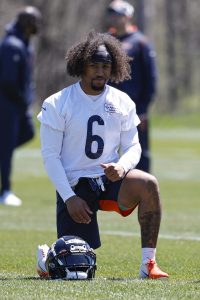 The Bears traded off their 2022 first-round pick in order to acquire QB Justin Fields during the 2021 draft, so they were armed with the No. 39 selection heading into the 2022 selection show. The front office ended up using their top pick on the Washington cornerback, and for good reason.

Gordon was a standout during four seasons with the Huskies. In 33 games, the defensive back collected 98 tackles, three tackles-for-loss, two interceptions, 14 passes deflected, and a pair of forced fumbles. He earned first-team all-Pac 12 honors in 2021 after finishing with 46 tackles.

The rookie cornerback is expected to start opposite Jaylon Johnson at cornerback. If Gordon hits a rookie wall, he could see some competition from the likes of Kindle Vildor or Duke Shelley.

With the signing, the Bears have now signed 11 of their 12 draft picks. Second-round safety Jaquan Brisker is the only rookie to remain unsigned.