After losing Brandon Beane‘s previous right-hand man to the Giants, the Bills will turn to a former general manager to fill that post. Ex-Texans GM Brian Gaine will now be Beane’s second-in-command. 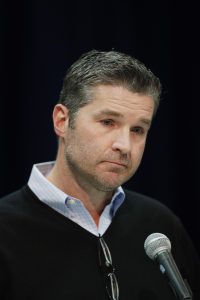 Gaine will replace Joe Schoen as Buffalo’s assistant GM, while Terrance Gray will rise to the role of player personnel director. The latter has been with the team since Beane’s arrival in 2017. After nearly five years in the assistant GM chair, Schoen became the Giants’ GM in January.

For Gaine, this marks his highest-profile position since the Texans’ surprising decision to fire him after barely a year. Houston hired Gaine from Buffalo in 2018, when he replaced longtime GM Rick Smith. But the team soon turned to then-HC Bill O’Brien, who took on de facto GM responsibilities during a rocky stretch to close out his tenure with the organization. Gaine finished just one season as Houston’s GM but resurfaced in Buffalo soon after.

This marks Gray’s second promotion in three offseasons. Hired as the Bills’ director of college scouting in 2017, the ex-Vikings exec became the team’s assistant player personnel director in 2020. After beginning his personnel career with the Chiefs in 2003, Gray spent 11 seasons as a Vikings scout. Given Schoen’s exit and the Bills’ rise during Beane’s tenure, it would not surprise to see Gray appear in GM searches soon.