The Cardinals made one of the biggest splashes during the draft when they acquired Marquise Brown. While they have time to work out a new contract with him, they are clearly seeking to do just that in the near future. 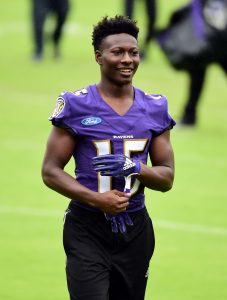 Arizona sent a first round pick to the Ravens for ‘Hollywood’ during Day 1 of the draft, honoring what, it was revealed shortly thereafter, had been a longstanding trade request. With the Cardinals, he is poised to be involved in a much more pass-happy offense than the one in Baltimore he is leaving. That rings true in particular with respect to the first six games of the 2022 season, during which DeAndre Hopkins will be serving a PED suspension.

As the team’s top receiving option for that stretch, Brown will have the opportunity to build off of his first career 1,000-yard season as he reunites with former college teammate Kyler Murray. The 25-year-old would help his cause, financially speaking, with another productive season. He has two more years on his rookie pact, including the fifth-year option in 2023, but the Cardinals will look to have him under contract for longer than that, considering the price they paid to acquire him.

“Yeah, we’d love to get it done” head coach Kliff Kingsbury said, via USA Today’s Tyler Dragon, when asked about an extension for Brown. “Hollywood is a guy that we see as a long-term answer.”

A second contract for Brown would be complicated by a number of factors. One is the seismic shift which has taken place in the WR market this offseason; 11 wideouts are now on contracts worth at least $20MM per season. While Brown may not reach that plateau on an extension, his price will no doubt be inflated by the other recent deals signed by young receivers. The Cardinals also have to consider the ramifications of an extension for Murray, which could be coming shortly, and the financial situation the team will be in after it is signed.

In addition to their top remaining offseason priority, this situation will be one worth watching for the Cardinals in the weeks to come.