Not long after his Buccaneers release, Bradley Pinion found a new home. The veteran punter is signing with the Falcons, according to NFL.com’s Tom Pelissero (on Twitter). It’s a one-year agreement. 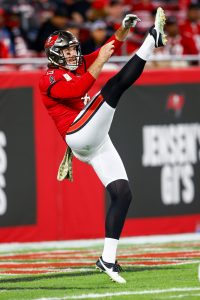 A seven-year veteran specialist, Pinion spent the past three seasons with the Bucs. Pinion played through a torn hip labrum last season, but after passing a physical on the way out of Tampa, he should be in line to take over as the next Falcons punter.

Pinion, 28, has been a punter and his team’s primary kickoff man throughout his career. The 49ers used him in these capacities from 2015-18, and the Bucs deployed Pinion as their kickoff man during his stay as well. As for punting, Pinion reached his top average in the Bucs’ Super Bowl-winning season. The Clemson alum averaged 45.2 yards per boot that year. The hip trouble likely contributed to Pinion’s average dropping to a career-low 42.5 in 2021.

The Falcons used three punters last season and they have not featured any consistency at this specialty spot since injuries ended Matt Bosher‘s run during the 2019 season. Veterans Dustin Colquitt and Thomas Morstead joined Cameron Nizialek in working as Atlanta’s primary punter throughout the 2021 campaign. None of those three are on Atlanta’s 2022 roster.

The Falcons have Dom Maggio and rookie UDFA Seth Vernon on their 90-man offseason squad. Neither has punted in an NFL regular-season game.