One of two first-rounders who had not signed their rookie contracts, Cole Strange is set to make his Patriots employment official. The rookie guard is expected to sign his deal Wednesday, InsidetheBirds.com’s Adam Caplan tweets. 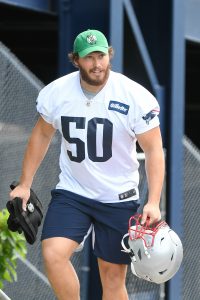 Strange’s signing will leave Steelers quarterback Kenny Pickett as the league’s lone unsigned first-rounder. Strange’s four-year deal will include a fifth-year option and, based on the final three first-rounders’ contractual terms, be fully guaranteed.

The Patriots drafted Strange 29th overall, and although the Tennessee-Chattanooga lineman was not expected to go in Round 1, this year’s Nos. 30-32 picks — George Karlaftis, Daxton Hill and Lewis Cine — were given fully guaranteed contracts. This has marked a progression for players chosen late in the first round. When the 2011 CBA began this era of rookie deals, late-first-round picks’ contracts were not fully guaranteed.

Strange is expected to be an immediate starter for the Pats, who saw 2021 guard starters Shaq Mason and Ted Karras depart. The Pats traded Mason to the Buccaneers for a fifth-round pick, doing so after Karras defected to the Bengals in free agency. Strange is expected to join Michael Onwenu as New England’s first-string guards.

Using his COVID-19-created additional eligibility year, Strange ended up a five-year starter for the Mocs. The 24-year-old blocker spent six years at the Division I-FCS program, redshirting in 2016. Although, the pandemic drastically altered the FCS squads’ schedules in 2020. Chattanooga played five games as part of its 2020 campaign. Strange returned in 2021 to start nine games at left guard, his primary college spot, and two at left tackle.