A day after Derek Wolfe revealed he underwent a second hip surgery this year, John Harbaugh said he is no longer with the Ravens. The sides parted ways Tuesday via an injury settlement, per Jeff Zrebiec of The Athletic (on Twitter). 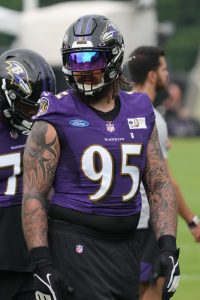 Wolfe has been with the Ravens since signing as a free agent in 2020. While he played 14 games during that season, hip and back trouble sidelined the veteran defensive lineman for all of the 2021 season. The Ravens opened Wolfe’s IR-return window but did not end up activating him, leading to a full-season IR stay.

Wolfe, 32, will still walk away with some guaranteed money. His contract called for $3.6MM guaranteed in 2022. But the longtime starter’s career may be coming to a close. Post-surgery, Wolfe said he is looking to “live a normal life,” potentially pointing to his career wrapping after 10 years. Though Wolfe was on pain medication while making his statement, it is easy to see him walking away after this lengthy ordeal. The Cincinnati alum was considering retirement after the first of his two 2022 hip operations.

The former Broncos second-round pick has 116 starts on his resume. Wolfe has played through injuries for much of his career and missed Denver’s stretch run to Super Bowl XLVIII after being hospitalized due to seizure-like symptoms. He returned for the 2014 season, reclaiming his starting post, and teamed with Von Miller, DeMarcus Ware and Malik Jackson to form a dominant pass rush that took over the AFC championship game and Super Bowl 50 to close out the 2015 season.

Just prior to those playoffs, Wolfe signed an extension to stay in Denver. Although the Broncos did not give him the third contract he sought in 2020, Wolfe scored two deals with the Ravens. The interior D-lineman has earned more than $50MM during his career.