Ravens linebacker Jaylon Ferguson died at age 26, according to a team announcement Wednesday morning. No cause of death has been provided. 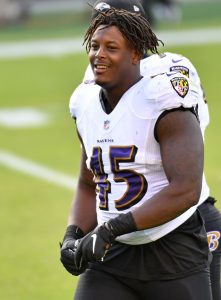 The former Louisiana Tech standout had been with the Ravens since 2019, joining the team as a third-round pick. Ferguson died in Baltimore, according to his agent.

Responding Tuesday night, Baltimore City Police found Ferguson unresponsive at home, Jamison Hensley of ESPN.com tweets. After being treated by medics, Ferguson was pronounced dead at the scene. No signs of trauma or foul play were found, Hensley adds (on Twitter).

“We are profoundly saddened by the tragic passing of Jaylon Ferguson,” the team said in a statement. “He was a kind, respectful young man with a big smile and infectious personality. We express our heartfelt condolences to Jaylon’s family and friends as we mourn a life lost much too soon.”

Ferguson served mostly as a rotational edge rusher with Baltimore, accumulating 4.5 sacks during his three-year pro career. He started nine games as a rookie and one during the 2020 season. But in college, the 6-foot-5 defender was a historically prolific sack artist.

Ferguson’s 45 sacks at Louisiana Tech are the most in Division I-FBS history. The Louisiana native played extensively in all four years at the mid-major program and closed out his college career with a 17.5-sack season in 2018, a campaign that earned him Conference USA Defensive Player of the Year acclaim.

“Jaylon was a good-hearted, gentle person who loved his family and his team,” John Harbaugh said. “He was a joy to talk with and be around every day. You always wanted to see and talk to ‘Ferg.’”

This tragedy comes during an offseason in which the NFL has lost 24-year-old Steelers quarterback Dwayne Haskins and 25-year-old Cardinals cornerback Jeff Gladney.