The Ravens’ offseason has been dominated by the distinct lack of progress being made regarding contract negotiations with Lamar Jackson. With the former MVP back at the team’s facility this week, though, he was able to provide an update on the situation. 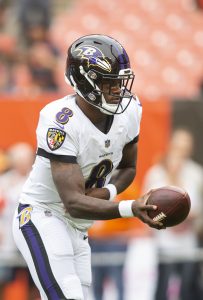 When speaking to the media after the team’s final practice before training camp, the 25-year-old said that he has been in conversation with GM Eric DeCosta about his contract status this week (Twitter link via the Athletic’s Jeff Zrebiec). That is in line with previous negotiations, as Jackson represents himself and DeCosta has personally handled talks throughout this process.

Jackson added that he “expects to stay with Ravens for his career,” something which seemed like an inevitability at one point but has since been clouded by the growing belief he will play on the fifth-year option in 2022. If that were to take place, the door would be opened to a pair of franchise-tag years, in a situation similar to the one involving Kirk Cousins in Washington.

On that point, ESPN’s Jamison Hensley reported before Jackson’s remarks today that there is “not a lot of optimism Baltimore and Jackson can agree to an extension before the season.” Talks between the two sides, even for a brief period, could change that sentiment, especially considering a different statement Jackson made.

Jackson “does feel worthy of a contract extension” at this time (Twitter link via Zrebiec). That contradicts the notion from earlier in the offseason that his focus would be squarely placed on the upcoming season, and remarks from owner Steve Bisciotti that he felt the need to win a Super Bowl before commanding a sizeable raise.

Jackson also made it clear that his unprecedented absence from Baltimore’s OTAs “was not contract-related,” as noted by Hensley (on Twitter). On the other hand, when asked about his planned attendance at training camp and the beginning of the regular season, he replied, “We’re having a conversation about it. I don’t know” (Twitter link).

Depending on how talks go, there could be progress made on an extension in the near future. It still appears likely, however, that this storyline will continue into the summer.