On Friday, Grant Cohn of SI.com published an article suggesting that the Buccaneers want to trade for 49ers quarterback Jimmy Garoppolo and install him as Tom Brady‘s successor. The report stemmed from a conversation that Dan Sileo, a former NFL defensive tackle and current sports radio host, had with renowned agent Don Yee. 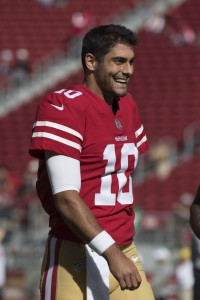 Yee represents both Garoppolo and Brady, who shared a quarterback room in New England for three-plus seasons after the Patriots drafted Garoppolo in 2014. However, while a Brady-Garoppolo reunion would certainly be an interesting story, there are a number of issues that would make such a trade difficult. Although Brady is entering his age-45 campaign and briefly retired this offseason, he is still playing at a high level, and Tampa may want him back in 2023 if the legendary signal-caller wants to continue his career. Plus, Garoppolo, who comes with a laundry list of injury problems and whose throwing shoulder surgery in March already complicated the Niners’ trade talks with other clubs, is due a $24.2MM salary this year. Although the 49ers are willing to let their 30-year-old passer negotiate a new contract with interested teams, the money that Garoppolo will want and the uncertainty of Brady’s future would make it difficult for Garoppolo and the Bucs to find middle ground.

Of course, all of those obstacles would only come into play if the Buccaneers truly wanted Garoppolo. Rick Stroud of the Tampa Bay Times throws cold water on that notion, saying, “Not a chance” (Twitter link). Stroud cites an unnamed Buccaneers coach who said, “[i]f (Garoppolo) could throw a deep ball, he would’ve won two Super Bowls already.”

The 49ers doubtlessly welcome any reports of outside interest in Garoppolo — reports that Yee might be trying to drum up — as the club does not have many potential trade partners at the moment. The Panthers took themselves out of the running when they traded for Baker Mayfield earlier this week, and if Mayfield’s prior team, the Browns, receive good news vis-a-vis Deshaun Watson‘s expected suspension, then Cleveland likely would not be in the market for Garoppolo either. Without the Browns in the picture, the 49ers may be forced to wait for another club to suffer injury or underperformance during training camp or the preseason to consummate a trade, or they may end up with no choice but to release Garoppolo before Week 1, when his salary becomes guaranteed.

Ben Volin of the Boston Globe offers a few potential landing spots other than Cleveland, but those are all imperfect, speculative fits. The list includes teams with established starters like the Raiders (Derek Carr) and clubs that have young quarterbacks that they want to continue evaluating, like the Texans (Davis Mills) and the Giants (Daniel Jones).