AUGUST 9: The Browns have been dealt a significant blow in their receiving corps, but also the return game. Jakeem Grant is suspected to have suffered a torn Achilles, per ESPN’s Jake Trotter (Twitter link). 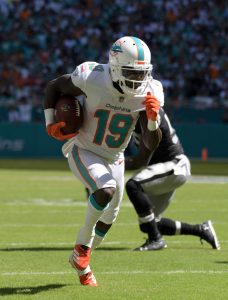 Grant, 29, has only totaled 100 receptions during his six-year career. He is best known for his effectiveness as a returner, something which earned him a significant free agent deal this offseason. Cleveland signed him to a three-year contract with a maximum value of nearly $14MM. The first campaign on that pact appears to be over before it began.

A sixth-round pick of the Dolphins, Grant registered over 1,000 all-purpose yards in 2018. That campaign included a 102-yard kick return, which was the longest in the league. He scored the only KR major the following year, and has maintained a carer average of 24.5 yards per runback on kickoffs, and over 10 yards per punt return.

A two-time Second-Team All-Pro member for his dynamic special teams play, the Texas Tech alum also received his first Pro Bowl nod last season, one which was split between the Dolphins and Bears. After his October trade to the Windy City, Grant saw a notable bump in offensive playing time, something which was likely to continue during his Browns tenure.

Cleveland has a new No. 1 wideout in Amari Cooper, but little else in the way of established veterans in their pass-catching corps. The release of Jarvis Landry opened up a starting role in the slot, which the five-foot-seven Grant was working towards earning during training camp. At a minimum, he faced the opportunity to improve upon his 29-catch, 330-yard performance in 2020, which was a career-high.

More testing will be done to confirm the injury, but Grant is likely to be sidelined for the 2022 season. In his absence, the Browns will move forward with the likes of Cooper, Donovan Peoples-Jones, Anthony Schwartz and third-round rookie David Bell in their wideout room. The team has ample cap space, so a deal to bring in a higher-profile receiver like Odell Beckham Jr. remains financially possible, but a reunion has long been considered unlikely. In addition, the Browns now need to find a replacement in their return game.