AUGUST 14: There has been no change in the status of negotiations between James and the Chargers, per head coach Brandon Staley (Twitter link via Thiry).

JULY 27: As training camp begins, no James-Chargers agreement is imminent, Aaron Wilson of ProFootballNetwork.com notes. Although mutual interest exists regarding a James extension — one that would likely make him a top-three highest-paid safety — the sides are not there yet. While James waits for a new contract, count him as a “hold in” performer. James is not practicing with the team presently, Adam Schefter of ESPN.com tweets.

JULY 24: James plans to report to Chargers training camp even if he does not yet have a new contract in hand, per Lindsey Thiry of ESPN.com. Thiry does suggest that an extension could be in place by the report date (which is just two days away), so it sounds as if player and team continue to move closer to an accord.

With respect to the injury problems that have dogged him during the first few years of his pro career — including offseason labrum surgery that limited him during spring work — James said, “this is the best I’ve felt in the last four years, and I can’t wait to go.”

JULY 20: A Derwin James extension could be coming. ESPN’s Jeremy Fowler reports (via Twitter) that the Chargers are optimistic that they’ll reach an agreement with their star safety. 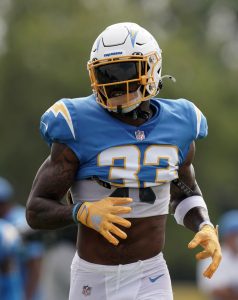 The 2018 first-round pick earned his second career Pro Bowl nod this past season after finishing with 118 tackles, two sacks, three forced fumbles, and two interceptions. Pro Football Focus was fond of his performance, ranking James ninth among 92 eligible safeties. The safety was limited to only five games in 2019 before sitting out the 2020 campaign, so it was a positive sign for both the player and organization that he could return to his Pro Bowl status.

His performance was also a positive development for the player’s earning potential. In fact, Fowler tweets that there’s “expectation from some” in the NFL that James will ultimately sign a contract that makes him the NFL’s highest-paid safety. Minkah Fitzpatrick paces the position with an $18.2MM average annual value, followed by Jamal Adams ($17.5MM AAV), Harrison Smith ($16MM AAV), Justin Simmons ($15.2MM AAV), and then four players making between $14MM and $15MM.

James will command at least $17MM per year, but if he intends to reset the market, he could sign a deal that exceeds $19MM per year. The safety franchise tag in 2022 was $12.9MM, and even assuming it goes up, there’s little chance that route would satisfy the impending free agent. Of course, it seems unlikely the Chargers would play hard ball with their homegrown player, anyway…especially after they ponied up to add defenders Khalil Mack and J.C. Jackson this offseason.

We heard last month that the two sides had engaged in preliminary discussions regarding an extension, and it sounds like both sides were hopeful that it’d get done before the start of the regular season. While the Chargers appear to be willing to pay up for James, the player’s injury history slightly complicates negotiations. Besides his injury issues in 2019, James also had offseaosn shoulder surgery that forced him to miss minicamp, although it sounds like his absence was just precautionary.

One comment on “Latest On Extension Talks Between Chargers, Derwin James”