Panthers cornerback Jaycee Horn missed the final 14 games of his rookie campaign after breaking three bones in his right foot. More than 10 months later, the former first-round pick is still sidelined. As Joseph Person of The Athletic writes, the Panthers continue to bring the cornerback along slowly as he recovers from the foot injury. 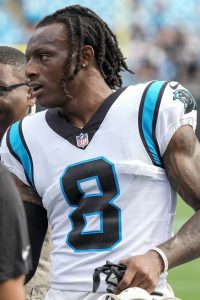 “I don’t want to get into all [the training staff is] doing,” said head coach Matt Rhule. “But they’ve taken some things and said, ‘Hey, give him a couple days.’ I think we all feel really good about where it’s headed.”

Horn made an appearance at OTAs and minicamp but reported soreness after his conditioning test, according to Person. He subsequently landed on PUP, and despite being activated since, he’s yet to participate in team drills. Horn isn’t expected on the practice field for at least a few more days, but there’s some optimism that he could return by next week.

“When you come back off a broken foot, you’re gonna deal with some soreness. … If you talk to anyone with a broken foot, they’re gonna tell you that’s what they generally deal with,” Horn told Person. “So I wasn’t too concerned. I was just taking the advice of the training staff and taking it slow.”

Following a standout collegiate career at South Carolina, the Panthers selected Horn with the eighth-overall pick in the 2021 draft. He started each of his three games last season, collecting five tackles and one interception. He’s expected to slide back into the starting lineup once he’s fully healthy.

One comment on “Latest On Panthers CB Jaycee Horn”