Mekhi Becton‘s latest setback leaves the Jets vulnerable at tackle, and while the team let Riley Reiff join the Bears after hosting him on a visit, it may not be prepared to pass on Duane Brown. 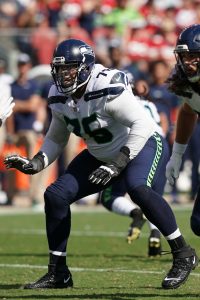 The former Texans and Seahawks tackle remains on the Jets’ radar, after visiting the team Saturday, and Jeremy Fowler of ESPN.com notes (via Twitter) mutual interest exists between the parties. Other teams have shown interest in Brown, but he is waiting for a satisfactory offer.

A 14-year veteran, Brown spent the past four-plus seasons as the Seahawks’ left tackle. Seattle selecting Charles Cross ninth overall closed Brown’s Pacific Northwest path, but the Jets appear to loom as a needy suitor. Becton’s injury news may well drive up Brown’s price. The team is believed to have an offer out, with SNY’s Connor Hughes noting (on Twitter) the ball is in the player’s court here. Other teams’ interest, which Hughes also confirms, and Becton’s injury are undoubtedly complicating matters for the Jets.

The Jets have George Fant preparing to play left tackle for a second season. That would position the former Seahawks backup for a potential windfall in 2023 free agency or via a Jets extension. With Becton’s career at a crossroads, Fant would seemingly become a higher Jets priority. Brown, 37, coming in and relocating Fant to the less lucrative right side would be an interesting development, especially considering the two were Seahawks teammates. Brown has been a left tackle throughout his career, making five Pro Bowls at the position. One of those came last season, albeit as an alternate.

But the Jets are now in need of a starting-caliber tackle. They considered Ikem Ekwonu at No. 4 overall but went with Sauce Gardner instead. Fant’s experience on both sides, having started opposite Becton at right tackle in 2020 and then moving to the left side opposite Morgan Moses, should prove valuable here. Moses signed with the Ravens this offseason. With Becton out of the picture, former third-round pick Chuma Edoga (12 career starts) is working as the team’s first-string right tackle, Rich Cimini of ESPN.com tweets.