7:20pm: Becton’s knee injury is more concerning that originally believed, per NFL Network’s Mike Garafolo (via Twitter). This is a new knee injury and isn’t related to the lineman’s previous knee issues, and both the player and organization should receiver some clarity on the severity tomorrow. As Connor Hughes of SNY tweets, there was initial optimism that Becton hadn’t even suffered a sprain, but a subsequent MRI revealed that the injury was worse than doctors initially thought.

3:27pm: The dislocated kneecap and MCL damage Mekhi Becton suffered in Week 1 of last season threw his career off track. Frequent rumors about his weight surfaced, and his stock within the Jets’ organization certainly plummeted. He has since been moved to right tackle. 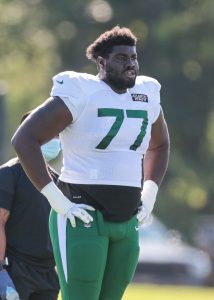 Becton has now run into more knee trouble. He limped off a Jets practice field Monday and is going through an MRI, Rich Cimini of ESPN.com notes. Robert Saleh called the exam precautionary, but coupled with Becton’s history, this should sound some alarm bells for the Jets. This injury happened during the second play of an 11-on-11 period, per Cimini, who adds it came after Becton moved gingerly during individual drills.

Already wearing a bulky brace on his surgically repaired right knee, Becton is battling to stay a Jets starter. The team brought in Pro Bowl left tackle Duane Brown for a weekend visit, and George Fant has full-season experience at both left and right tackle. A scenario in which the Jets sign Brown and slide Fant to the right side appears to be in play. Brown visiting before this Becton setback is notable as well, as is the Jets’ consideration of Ikem Ekwonu with their No. 4 overall pick this April. The Jets remain interested in the former Texans and Seahawks blocker, per Cimini.

“We’ll see if he does take time off,” Saleh said of Becton. “Obviously, you’re concerned for everyone. … You just don’t want to get into a deficit of conditioning. He’s a big man. He’s been working his tail off and he’s done everything he’s been asked to do. Hopefully, he checks out good like we think he’s going to and he can continue on this track. I think he’s going to be fine.”

Gang Green’s first-round pick in 2020, Becton did not participate in OTAs or minicamp. Becton is believed to have still been around 390 pounds at minicamp, and although the Louisville product shed some weight ahead of training camp, Cimini adds his June weight was a point of frustration for some in the organization. Arriving ahead of Adam Gase‘s final year as Jets HC, Becton has played just 14 of a possible 33 games as a pro and has not finished six more due to various issues.

Backup tackle Conor McDermott is also week-to-week with a sprained ankle, adding to the issues the Jets are experiencing up front. They also hosted Riley Reiff ahead of training camp, but the veteran tackle signed with the Bears recently.