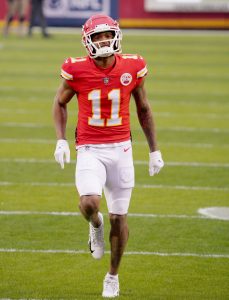 After coming off the bench for the first 38 games of his career, it looked like Butler may have been evolving into a starter after collecting six sacks in nine starts for the Panthers in 2019. That performance earned the former first-round pick a two-year contract from the Bills, but he never saw more than a situational role during his time in Buffalo, collecting 29 tackles and zero sacks in 24 games.

Butler was one of six defensive tackles/nose tackles to join the Raiders this offseason (including draft picks). It sounds like the 28-year-old didn’t show enough to beat out the likes of Johnathan Hankins, Andrew Billings, Bilal Nichols, and Kyle Peko.

Robinson also joined the Raiders this offseason after having spent the first six seasons of his career with the Chiefs. The wideout hauled in 14 touchdowns between 2018 and 2021, and he had two seasons where he topped 400 receiving yards. Most recently, Robinson caught 25 passes for 264 yards and three touchdowns before adding another four receptions in the postseason.

In Las Vegas, the 27-year-old was expected to compete for the WR3 spot behind Davante Adams and Hunter Renfrow, but it sounds like the Raiders are comfortable rolling with either Mack Hollins or Keelan Cole in that role.