It sounds like Malcolm Butler‘s comeback attempt with the Patriots has come to an end. ESPN’s Field Yates reports (via Twitter) that the Patriots have placed the cornerback on injured reserve. Considering the timing of the transaction, Butler is ineligible to be activated during the 2022 campaign. 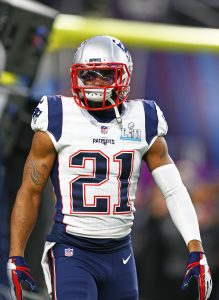 Butler returned from his one-year hiatus and inked a two-year deal with the Patriots this offseason. There was initial fanfare surrounding the signing, with some hoping the former Super Bowl hero could slide into a secondary that lost Stephon Gilmore and J.C. Jackson in less than a calendar year. However, reports indicated that he was falling down the depth chart throughout training camp, with Doug Kyed of Pro Football Focus suggesting the veteran could even be a cut candidate. Instead of saving a hair under $1.5MM by cutting Butler, the Patriots decided to place him on injured reserve with an undisclosed injury, a hint that the team may look to keep him around for the 2023 season.

After joining the Patriots as an undrafted free agent in 2014, Butler served as a reserve corner until being called into action in Super Bowl XLIX and making one of the most famous interceptions in NFL history. Butler was awarded the starting gig the following year and kept that job until signing with the Titans as a free agent in 2018. He continued to start in Tennessee for three years before being released as a cap casualty after the 2020 season. Butler rebounded quickly, signing a deal to join the Cardinals, but just prior to the start of the 2021 season, Butler decided to retire for personal reasons. The last time he played, Butler collected a career-high 100 tackles and four interceptions in 16 starts for Tennessee in 2020.

The Patriots are now down two cornerbacks after the team revealed earlier today that Joejuan Williams suffered a season-ending shoulder injury. Jalen Mills has come on strong in training camp, and he’ll likely be joined in the starting lineup by free agent acquisition Terrance Mitchell and nickelback Jonathan Jones. Third-round rookie Marcus Jones and (especially) fourth-round rookie Jack Jones have earned high praise during minicamp and training camp, and their presence may have made Butler’s “injury” a bit more tolerable.