AUGUST 31: The deal is going through. Drake will join his fourth team, with Rapoport adding the Ravens have agreed to terms with the seventh-year back (Twitter link).

AUGUST 30: With plenty of questions still surrounding their RB room, the Ravens are set to make an addition at the position. Baltimore is hosting veteran Kenyan Drake and “likely will sign him” pending a physical, per NFL Network’s Ian Rapoport (Twitter link). 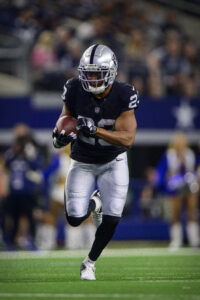 The 28-year-old was on the roster bubble in Vegas, leading to the recent announcement that he would either be traded or cut. Nothing materialized on the trade front, as expected, leaving Drake on the open market. His Raiders tenure lasted one season, and produced 254 rushing yards and a pair of touchdowns; he added 30 catches for 291 yards and another score across his 12 games played.

Despite his release causing $8MM in total dead cap charges, the Raiders were willing to proceed with the move. That leaves the team with Josh Jacobs in the No. 1 spot for at least one more season, as they declined his fifth-year option, and a mix of veterans and rookies behind him. Drake will enter a similarly-crowded Ravens backfield, but he should be in line for a more significant workload.

Baltimore could have lead back J.K. Dobbins on the field for the first time since 2020 as early as Week 1, but he will not handle a full starter’s workload right away. That, coupled with the absence of backup Gus Edwards for at least the first four games of the season, leaves plenty of snaps available for other options. That list includes veteran Mike Davis and sixth-round rookie Tyler Badie.

Drake will compete with those two for a role in the build-up to the regular season. At least until Dobbins and Edwards are back to full health, he should give the team a more proven pass-catching back.