The 49ers are having some bad luck with MCL sprains. An injury that often can sideline players for a period of a few weeks may end up shutting down two San Francisco starters for two months. Azeez Al-Shaair suffered this particular injury Sunday night. 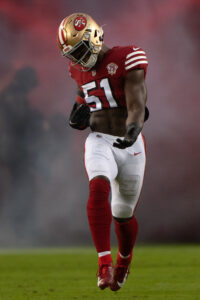 An Al-Shaair IR trip seems a certainty. Kyle Shanahan said the fourth-year linebacker sustained an MCL sprain similar to Elijah Mitchell‘s. The 49ers placed Mitchell on IR after Week 1 and expect their starting running back to be out for approximately eight weeks. Al-Shaair’s setback will remove one of the team’s starting linebackers from the equation for a similar time period.

Al-Shaair went down during the second quarter of the 49ers’ loss to the Broncos. This represents a poorly timed injury for the former UDFA. Al-Shaair, 25, is eligible for unrestricted free agency in March. Once linked to an Al-Shaair/Dre Greenlaw either/or decision regarding an extension, the 49ers have since signed Greenlaw to a two-year deal. With Fred Warner already signed to the position’s second-highest contract, Al-Shaair may need to collect his payday from another team.

Although still a starter, the Florida Atlantic alum has played behind Warner and Greenlaw this season. Al-Shaair ceded the three-down role he held last year back to Greenlaw, whose 2021 injury opened the door to a full-time gig alongside Warner. Al-Shaair started 13 games last season, made 102 tackles, registered two sacks and recovered two fumbles.

The team will turn to Demetrius Flannigan-Fowles at strongside linebacker, Matt Barrows of The Athletic notes (subscription required). A 2020 UDFA out of Arizona, Flannigan-Fowles has made three career starts. The 49ers also have ex-Packers third-rounder Oren Burks on their roster, signing him in free agency this year.