The Bills’ passing attack will see one of its top cogs miss Week 2. Gabe Davis is not expected to play Monday night, Jeremy Fowler of ESPN.com tweets. 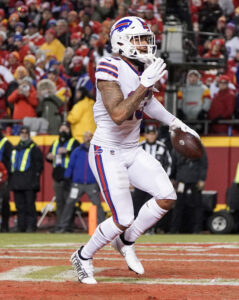 Davis suffered a noncontact ankle injury during Buffalo’s Saturday practice, Mike Garafolo of NFL.com tweets. It will lead to an absence against the Titans. This is an early blow to a Bills team coming off a dominant season-opening win over the Rams. The Bills have officially declared Davis inactive.

After Buffalo let Emmanuel Sanders walk in free agency — months ahead of the veteran’s retirement — Davis moved into the team’s starting lineup opposite Stefon Diggs on the outside. The team also released Cole Beasley this offseason, leading to an Isaiah McKenzie–Jamison Crowder slot pairing. Both the inside receivers played extensively in Week 1. Each should be expected to play a bigger role tonight.

A former fourth-round pick, Davis has been a steady part of Buffalo’s passing game since his rookie season. The Central Florida alum surpassed 500 receiving yards in each of his first two seasons, despite the presences of John Brown and then Sanders as starters. Davis delivered one of the great receiving games in NFL history in January, catching a playoff-record four touchdown passes in the Bills’ shootout loss to the Chiefs. That offered the Bills more than enough evidence to indicate the 6-foot-2 target was ready for a full-time role in 2022.

Depth-wise, Jake Kumerow and fifth-round pick Khalil Shakir round out Buffalo’s receiving corps. The rookie, who topped 1,100 receiving yards as a Boise State senior, did not dress for the Bills’ Los Angeles opener. Shakir should be expected to suit up Monday, with ESPN.com’s Chris Mortensen indicating the team has confidence the rookie can contribute (Twitter link). Having famously received an Aaron Rodgers endorsement, Kumerow has been with the Bills since 2020. He has played mostly on special teams, having caught just three passes for 50 yards as a Bill.