Mike Kafka‘s run calling Giants plays will not stop after the preseason. The team will keep its young offensive coordinator in this role to start the year, Brian Daboll said Monday morning. 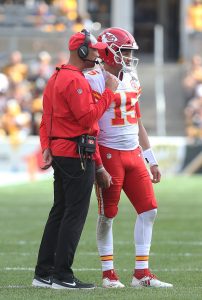 The Giants hired Daboll after his run as the Bills’ play-caller led to Josh Allen rising to superstar status. Kafka, 35, received an extensive look calling plays this summer, but Daboll retaking the reins would not have been surprising. Kafka, the previous Chiefs quarterbacks coach, taking over to start the regular season marks an unexpected development — at least from the perception when Daboll was hired in January. Offense-oriented HCs generally work as their team’s play-caller.

This will be new territory for Kafka, who was behind Andy Reid and Eric Bieniemy in Kansas City. Daboll has called plays for multiple teams before, though his Bills OC work catapulted him into position to become the Giants’ head coach. He will start the season as a CEO-type leader in New York.

Although Daboll and GM Joe Schoen are leading a Giants rebuild, this marks a seminal season for two Dave Gettleman-era cornerstones. Daniel Jones and Saquon Barkley are going into contract years. The team’s play-caller will do plenty to determine how New York’s starting quarterback and running back’s seasons go. That responsibility will fall on Kafka, who was Patrick Mahomes‘ position coach during each of the former MVP’s first four seasons. Kafka will be Jones’ fourth play-caller in four seasons, following Pat Shurmur, Jason Garrett and Freddie Kitchens.

Daboll was expected to be the team’s play-caller, but Kafka has been on the rise for a while. Mahomes’ explosive breakout naturally increased interest in his position coach, and ESPN.com’s Jordan Raanan opines the Giants used the prospect of calling plays as a way to poach him from Reid’s staff (Twitter link). Reid has regarded Kafka as a future HC, SI.com’s Albert Breer tweets.

Prior to joining Reid’s staff as a quality control assistant in 2017, Kafka was a GA at Northwestern. The ex-Wildcats quarterback spent six years on NFL rosters as a backup QB. Kafka becoming the Giants’ play-caller in earnest will place him on a faster track to receiving HC interviews, though Big Blue’s 2022 offense will determine how quickly that happens.