After laboring through the final minutes of the Chargers’ Thursday game, Justin Herbert underwent a series of tests. The scans did not reveal an injury that will force the star quarterback to miss much time, if any at all. 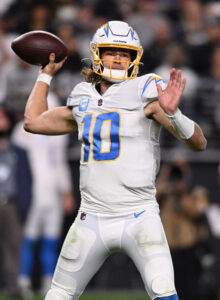 Brandon Staley said Herbert sustained a rib cartilage fracture and called his starting QB “day-to-day.” Herbert should have a decent chance of playing in the Bolts’ Week 3 game, Mike Garafolo of NFL.com tweets.

While Staley noted (via Bridget Condon of NFL.com, on Twitter) this is a better outcome than a rib fracture, a fracture of any kind should not exactly be dismissed as a non-issue for the third-year passer. Herbert at one point passed on running for an easy first down as he winced in pain near the end of the Chargers’ Kansas City tilt. Of course, he then threw a strike to DeAndre Carter to set up the Chargers near the Chiefs’ goal line.

A series of rib fractures shut down Drew Brees for a stretch in 2020, but the then-Saints quarterback also suffered a collapsed lung. That set of injuries caused Brees to miss five games that season. Herbert does have a longer stretch to ramp up for Week 3 — a Chargers-Jaguars matchup — but Thursday’s visuals were obviously concerning.

This is certainly a pivotal year for the Chargers, who have missed the playoffs in two of the three seasons in which Herbert must be attached to a rookie contract. The Bolts aggressively upgraded their roster this offseason, adding the likes of Khalil Mack, J.C. Jackson, Sebastian Joseph-Day, Kyle Van Noy and Bryce Callahan on defense. Herbert remains the centerpiece of Tom Telesco‘s plan. The former No. 6 overall pick becomes extension-eligible in 2023, though he can be kept on his rookie deal through 2024 via the fifth-year option. Most teams have opted for pre-Year 4 extensions with star quarterbacks, so this season could be Herbert’s last on that rookie deal.