Myles Garrett sustained multiple injuries in a Monday car accident, and although the Browns defensive end was released from the hospital Monday night, his season may be paused for a bit. 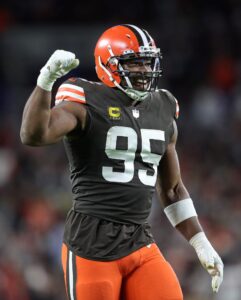 Garrett sustained a shoulder sprain and biceps strain in the accident, Tom Pelissero of NFL.com reports, adding that the sixth-year pass rusher also suffered lacerations during the single-car accident (Twitter link). Garrett crashed his 2021 Porsche after leaving the Browns’ facility. The vehicle flipped several times, according to News5Cleveland.com.

The Browns confirmed Garrett did not sustain any fractures and confirmed he has cleared concussion protocol. The female passenger who was with Garrett also did not sustain serious injuries, according to the team. All things considered, Garrett came out of this incident fortunate, even if he is forced to miss games as a result.

Garrett, 26, did not miss a game last season and has been a first-team All-Pro in each of the past two years. The star edge defender missed two games in 2020 due to COVID-19 but has not missed a game due to injury since his 2017 rookie season. Garrett was banned for six contests in 2019, after his infamous helmet strike on Mason Rudolph.

In the offseason following his suspension, the Browns gave Garrett a then-defender-record five-year, $125MM extension. The former No. 1 overall pick has rewarded his team, registering 28 sacks from 2020-21. Teaming with Jadeveon Clowney again, the Texas A&M product has three thus far this year. Clowney’s status becomes more important now, too. The ninth-year defensive end missed Cleveland’s Week 3 game with an ankle injury. The Browns have not ruled him out for their Week 4 tilt against the Falcons.