After being limited to two catches in Week 1, Giants wideout Kenny Golladay only saw two snaps during Sunday’s win over the Panthers. Naturally, the veteran revealed today that he’s not satisfied with his limited role. 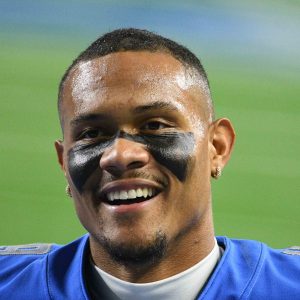 “Of course I don’t really agree with it. Or like it,” Golladay told reporters (via ESPN’s Jordan Raanan). “But I can only control what I can control, which is to come to work every day.”

Things haven’t gone as planned for Golladay during his time in New York. He inked a four-year, $72MM deal last offseason, but he finished the campaign with 521 receiving yards and zero touchdowns. With a new regime in place, Golladay found himself on the outside looking in throughout this year’s training camp and preseason. As Raanan notes, the writing was on the wall when Golladay was one of the few veterans to play in the team’s preseason finale.

While the 28-year-old appears to be buried on the depth chart, coach Brian Daboll and several Giants teammates told Raanan that Golladay has handled the situation “like a pro.” However, the receiver did hint that he may look to get out of New York if his situation doesn’t improve.

Of course, moving Golladay is easier said than done. He’s still owed more than $11MM this year, and the Giants are on the hook for $4.5MM in 2023. It wasn’t too long ago that Golladay led all NFL receivers in touchdowns, and Daboll has continually stated that the WR depth chart is fluid. If the veteran doesn’t start acting out, he could end up seeing a role sooner than later.