Jason Pierre-Paul wasn’t the only big-name linebacker to visit the Ravens yesterday. Baltimore also worked out linebacker Blake Martinez, according to Clifton Brown of the team’s website. 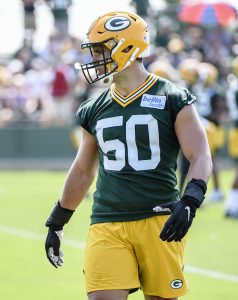 Steven Means suffered a season-ending Achilles tear on Sunday, and with Tyus Bowser and David Ojabo both sidelined with their own Achilles injuries, Baltimore is down to only two outside linebackers in Odafe Oweh and Justin Houston. With limited depth, the Ravens decided to bring in a pair of veterans for auditions, and while no deal has been announced as of Wednesday night, coach John Harbaugh made it clear that he’d appreciate some reinforcement.

“That would be great,” Harbaugh replied when asked if the team has plans to sign an OLB. “I’ve already asked them once, and I’ll ask them again, ‘Are you in shape? Are you ready to go play? Are you ready to run around and help us win?’ Because that’s what I care about; we’re not trying to do anyone any favors here. We want guys who will come in and help us win right now. If you’re ready to do that – that’s really for any player – come on.”

Martinez led the NFL in tackles between 2017 and 2020, compiling 594 with the Packers and Giants. He collected another 23 tackles through the first three games of the 2021 season, but a torn ACL ended his season prematurely. He was cut by New York at the end of the 2022 preseason.

The Ravens did add some LB depth to their practice squad earlier today when they signed Brandon Copeland. The 31-year-old has seen time in 82 games since debuting in 2015, including 16 games with the Falcons in 2021.