Compared to the offseasons leading up to the 2020s, this decade has brought more movement among veteran quarterbacks. While the 49ers are now grateful their efforts to become part of this year’s action-packed QB carousel failed, as Trey Lance is out for the season, they expected Jimmy Garoppolo to end up somewhere else.

John Lynch has said he was talking to multiple teams at the Combine about moving the longtime San Francisco QB1. One of those appears to be the Commanders. During the initial part of Garoppolo’s complex year, before his shoulder surgery, the 49ers believed the Commanders would be the team that traded for the ninth-year passer, according to Tim Keown and Nick Wagoner of ESPN.com. Indeed, fellow ESPN scribe Adam Schefter reports that San Francisco and Washington had the parameters of a deal in place, a deal that would have involved multiple draft picks. 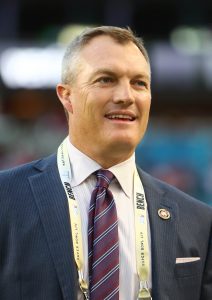 With Ron Rivera indicating the Commanders were pursuing several veteran QBs this offseason — one that included a three-first-rounder offer for Russell Wilson — it was already clear that Garoppolo was on the team’s radar. But the March shoulder surgery — a procedure Garoppolo’s camp believed he could avoid — changed everything, leading to a months-long market standstill. Ian Rapoport of NFL.com reiterates the Commanders’ interest in Garoppolo, and he adds that the Colts were involved as well. That jibes with RapSheet’s reporting from earlier this year, though other reports indicated Indy was not particularly serious.

Regardless, teams were plainly concerned about Garoppolo’s timetable and his willingness to accept a pay cut, Jeff Howe of The Athletic notes (subscription required). Shortly after it became known Garoppolo would undergo shoulder surgery, the Colts swung a deal for Matt Ryan and Washington moved on to Carson Wentz, acquiring the former No. 2 overall pick for two Day 2 draft choices and a 2022 second-round pick swap.

Such a haul would have been a value coup for the 49ers, who were staring at the prospect of releasing Garoppolo. But the 49ers’ Super Bowl hopes again hinge on their injury-hounded starter remaining available. Garoppolo’s 2018 ACL tear did not appear to derail a Super Bowl threat, but his 2020 ankle malady certainly hurt one. The 30-year-old passer’s three injuries last season (calf, thumb, shoulder) limited him at points, with the latter two issues plaguing him in the playoffs.

“It was right in the middle of training camp, [Kyle Shanahan] kind of just called me in one day and threw out the idea, and it really wasn’t even on my radar until he said something about it,” Garoppolo said of the team’s offer to bring him back on a restructured deal, via Albert Breer of SI.com. “And then he kind of laid it out and obviously the restructure is what it is, I think it had to be done just with the situation. I know it sounds weird, but things kind of just fell into place, honestly. It wasn’t like I was planning on this happening or anything.

“… I mean, honestly, at one point, I didn’t think I was going to be a Niner. I was pretty set on going to a couple different teams I had in mind. And then all of a sudden things switched last second.”

Lynch initially approached Shanahan about circling back to Garoppolo, according to ESPN, but the sixth-year HC did not expect Garoppolo to accept a backup role or a restructure that reduced his salary. Garoppolo was set to make $24.2MM in base salary; that number is down to $6.5MM. But the incentive package that can move the deal to $15.45MM has already begun paying out. Garoppolo receives $250K for each game in which he takes at least 25% of the offensive snaps. Each game in which that snap threshold is met and the 49ers win produces another $100K.

Had the restructure not occurred and a Garoppolo release took place, ESPN adds the Browns were prepared to explore a free agency addition. Conflicting reports emerged about Cleveland’s interest in adding Garoppolo as a better Deshaun Watson fill-in option, with the five-game add-on to the new Browns starter’s suspension igniting these rumors. Although the 49ers gave other teams permission to negotiate a revised deal with Garoppolo, the Browns joined the rest of the NFL in being unwilling to part with assets for him. The Rams were interested in a possible Garoppolo free agency deal; the Seahawks were also believed to be interested in such an agreement. Instead, Garoppolo re-emerged to lead the 49ers to a one-sided win over Seattle.

Jacoby Brissett will be asked to complete the 11-game bridge to Watson, while Wentz is still on the Eagles extension he signed in 2019. The Commanders have him signed through 2024, though no guaranteed money is on the deal beyond this season. Garoppolo is on track for free agency in 2023.

14 comments on “49ers Expected Commanders To Trade For Jimmy Garoppolo; Browns Were Interested In FA Deal”